Governor Cuomo recently announced a proposed 30-day amendment to the Executive Budget by using Internet sales tax revenue to fund villages and towns that are economically impacted — one month after proposing cuts to the Aid and Incentives to Municipalities (AIM) program, which many towns and villages in New York State use for general funding. Any municipality that requires assistance would receive money from online sales taxes rather than from AIM.

“This proposed bait-and-switch scheme will not affect New York City, but it will affect all the towns and villages in Long Island, especially Suffolk County,” Mr. Kennedy said. “Using Internet sales tax revenue while slashing AIM funding is not feasible, especially when these local governments are facing extreme economic circumstances.”

John M. Kennedy, Candidate for Suffolk County Executive, is calling on current County Executive Steve Bellone to give back $400,000 that was raised at his re-election fundraiser last year in which Democratic State Senate Majority Leader Andrea Stewart-Cousins — who was one of the elected officials responsible for killing a plan to bring 25,000 jobs to New York City — attended.

On December 19, 2018, Ms. Stewart-Cousins headlined a fundraiser for Mr. Bellone’s re-election campaign in Huntington. Despite Ms. Stewart-Cousins’ public declarations that she would work to protect the interests of suburban working people, she was one of the elected officials who fought against the proposed Amazon HQ2 facility in Long Island City.

On February 14, 2019, Amazon announced it would not open a New York City location. Such a project would have attracted those same people whose interests she purports to protect.

John M. Kennedy, Candidate for Suffolk County Executive, blamed the current County Executive, Steve Bellone, for failing to keep Amazon in New York City by campaigning for a Democratic majority in the state Senate that would vote to stifle economic development.

On February 14, 2019, Amazon announced that, because of fierce opposition by members of the City Council and the state Legislature, it will not bring its HQ2 location to the Long Island City section of Queens. New York State Governor Andrew Cuomo and New York City Mayor Bill de Blasio — both Democrats — attempted to keep Amazon in New York City, but their efforts were thwarted by state Senators in their own party.

“Steve Bellone campaigned for six months to bring a Democratic majority to the New York State Senate,” Mr. Kennedy said. “Mr. Bellone accomplished that goal and they failed to authorize Amazon’s proposed headquarters. This was necessary for the region and it would have brought in 25,000 jobs, which would have benefitted those in New York City and Long Island. Lo and behold, as no surprise, Mr. Bellone’s allies were unwilling to do what’s necessary to improve the local economy.” 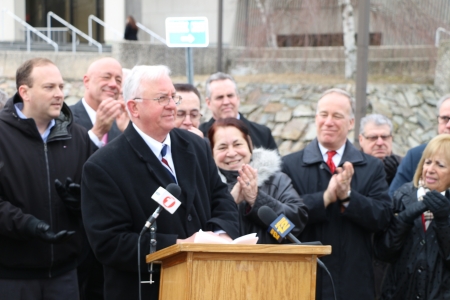 © 2021. The Public Relations and Marketing Group, LLC. All Rights Reserved.