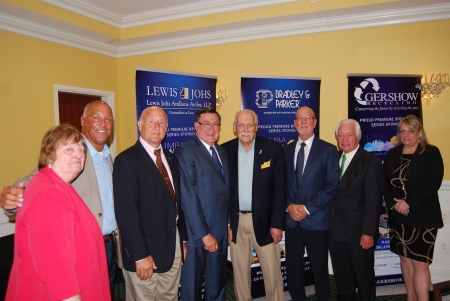 On June 7, Ed Romaine, Supervisor, Town of Brookhaven spoke about the town’s latest accomplishments and where he expects the town to be heading at the LIMBA (Long Island Metro Business Action) meeting, which took place on June 7 at the Courtyard by Marriott in Ronkonkoma.

Mr. Romaine noted that the town has a bond rating of AAA — the highest bond rating a town can receive — and was the first town on Long Island to pay off its pension debt. He said the first thing the town does is pay off its debt so that it does not have to pay for operational expenses.

On the issue of code enforcement, Mr. Romaine said its officers have been cracking down on “zombie homes,” which he said are blights on neighborhoods and drive down the property values of the surrounding homes. Since Mr. Romaine has been in office, 275 zombie homes have been taken down and four more are scheduled to be demolished. Those homes left in disrepair are boarded up by the town.

“We are sending a message: if you don’t maintain your home, we’ll board it up,” Mr. Romaine said. “We are serious when it comes to code enforcement.”

Mr. Romaine said one way for the government to save money is through consolidation, adding that Brookhaven was the only town in the state to receive a consolidation grant in the amount of $20 million to work with other municipalities in consolidating its services. Under his leadership, Mr. Romaine dissolved four water districts, saving town residents money, as well as two emergency services districts, and combined all six erosion districts on Fire Island into one district.

Other examples of consolidation include property tax collection on behalf of other municipalities (this is being done for the Village of Bellport); a regional truck washing facility for other towns and villages, highway departments, school districts and fire districts to use; and a digital recordkeeping facility where other town and municipal clerks can store their records without wasting paper.

Another cost-saving measure is the use of alternative energy. Mr. Romaine said reducing energy use not only reduces Brookhaven’s carbon footprint, but it will save the taxpayers money. Overall, the town has used 2.3 million fewer kilowatts of electricity, reduced greenhouse gases by 7,500 tons of carbon dioxide and, through the use of electric vehicles, brought down its consumption of goal by 100,000 gallons a year. Mr. Romaine also supports the idea of installing solar panels on newly built homes, but he emphasized that it should be an incentive, not a mandate like some environmental groups and elected officials want it to be.

As Supervisor, Mr. Romaine has championed environmental and quality-of-life issues in Brookhaven, while strengthening Town finances. He spearheaded legislation to protect the Carmans River in his first year in office and introduced a package of legislation that has strengthened the Town’s housing codes. Mr. Romaine has also reduced millions of dollars in pipeline debt and maintained the Town’s strong credit rating.

Mr. Romaine was a member of the Suffolk County Legislature and was later elected Suffolk County Clerk, serving for 16 years. He has been the Brookhaven Town Supervisor since 2012.