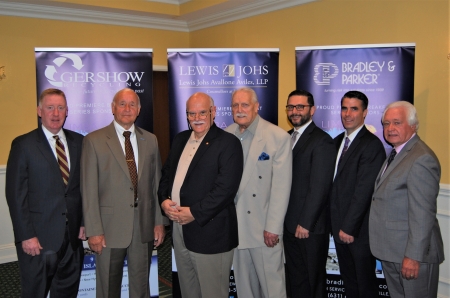 On May 24, John T. Tanacredi, Ph.D., Executive Director, Center for Environmental Research and Coastal Monitoring (CERCOM), presented “Our Coastlines Under Siege” at the LIMBA (Long Island Metro Business Action) meeting at the Courtyard by Marriott in Ronkonkoma. Dr. Tanacredi discussed the health of the Long Island coastal ecosystem and the effects that it has on the overall health of Long Island’s environment.

An estuary, simply put, is “where the river meets the sea.” It is partially surrounded by land, and the water is a mixture of freshwater and salt water. An example of an estuary is a bay or a harbor. According to Dr. Tanacredi, estuaries provide food and breeding areas for more than 70% of seafood catch in U.S. waters, which is worth $10 billion to the nation’s economy. However, he said the estuaries are being endangered, mostly by development and related pollution sources, such as precipitation.

Dr. Tanacredi spoke about the importance of preserving the Great South Bay. In order to protect the waterway’s ecological quality, which is robust and healthy, there must be an inventory of living resources before talking about the environmental impact on the Bay and continuous monitoring.

The U.S coastline is also thought to be in danger. Dr. Tanacredi said that the ocean level has been raised by one foot over the past 100 years. Some issues of concern that may have contributed to this problem include manufactured gas plants, sprawl, loss of habitat and sewage treatment plant effectiveness. He added that 124 million people currently live along the U.S. coastline.

One of the more important waterways in our area, Dr. Tanacredi said, is Jamaica Bay. In 1969, the National Academy of Science investigated pollution on the Jamaica Bay, where Idlewild (now John F. Kennedy) Airport was looking to extend the runway. It was determined that the pollutants found in the bay would take 30 days to flush out; however, in the late 1980s, it was determined by researchers from Columbia University and the University of Rhode Island that the timeline shrank to seven to 10 days, thanks to new technological advancements in monitoring.

Currently, Dr. Tanacredi has a goal to preserve the population of horseshoe crabs on Long Island. There are 115 breeding and field sites that they monitor throughout the island, as part of Molloy College’s earth and environmental sciences degree program. He said these crustaceans are becoming endangered, as they are being used here for fishing bait. Over 135,000 horseshoe crabs are collected for bait purposes and are issued collecting permits by the New York State Department of Environmental Conservation for this purpose. “This bait collection for horseshoe crabs must stop,” Dr. Tanacredi said.

Dr. Tanacredi has nearly 45 years of experience in the fields of environmental, ecological and conservation biology, in which he has published more than fifty scientific publications as well as five books. After serving as a meteorologist for the U.S. Navy, he served as an environmental analyst for the U.S. Coast Guard Bridge Administration, then as a research ecologist with the National Park Service and finally as an educator. Over the years, he has held associate positions with many ecological and biological institutions over the years, such as the Wildlife Conservation Society and the American Museum of Natural History’s Department of Invertebrate Zoology. He earned his Bachelor’s degree from CUNY Richmond College, his Master’s degree from CUNY Hunter College and his Doctorate degree from NYU Polytechnic Institute.

About LIMBA Since 1968, LIMBA (Long Island Metro Business Action) has been Long Island’s catalyst for economic investment and improvement, sponsoring lively breakfast forums featuring Long Island business activists and government officials. Its mission is to promote and address issues that affect the quality of life on Long Island. For more information, call (631) 757-1698 or visit www.limba.net.