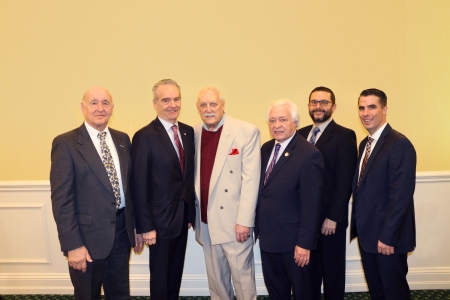 Mr. Cameron talked about how he formed his own company, Cameron Engineering, starting out with only $5,000 in the bank. He was greatly influenced by the book The Power Broker, a biography of Robert Moses, who was credited with the creation of Long Island’s roadway system. Mr. Cameron emphasized the fact that Mr. Moses was initially a very idealistic person, but never accomplishing anything changed his ways. When Mr. Moses designed the highway system, Mr. Cameron said, he did not take mass transit into account.

His company was one of the engineering firms chosen to be a part of the Ronkonkoma Hub project at the Long Island Rail Road (LIRR) station. Mr. Cameron said the proposed project is at an ideal location because of the second track and the proposed third track that will be built, its location near four of the exits off the Long Island Expressway and its proximity to Long Island MacArthur Airport.

In late 2010, the Council released the Long Island Regional Comprehensive Sustainability Plan, or LI 2035, which assesses Long Island’s position in terms of environmental, social and economic sustainability and identifies the key opportunity areas and issues of concern among Long Islanders from across the region. Among the areas the plan covered were taxes and spending, the economy, infrastructure, the environment and equity. By “equity,” Mr. Cameron meant that those who are not well-represented in the population will have a voice on what they want to see on Long Island in the coming years and are part of the solutions being developed.

The two biggest challenges Long Island is facing, according to Mr. Cameron, are the tax burdens that residents face and the lack of diversity in housing. He mentioned that Long Islanders face high taxes and legacy costs, with two-thirds of their tax bills consisting of school taxes. The school tax burden comes, not just from teacher’s salaries and benefits, but also from over 500 unfunded mandates, for which school districts have to bear the cost.

On the issue of consolidation, Mr. Cameron said the districts can remove the upper echelon of school administrators, and, yet, that will still not alleviate the high tax burden because of the unfunded mandates. When a group fights to eliminate these mandates, Mr. Cameron said, a stronger lobbying group will fight to have these mandates remain in place. He added that the teachers’ unions are the strongest influence in creating educational policy; in addition, the U.S. spends the most on education than any other nation, yet the country does not finish in the top 20 in student performance.

The conversation turned to Long Island’s infrastructure. Mr. Cameron emphasized the need to provide sewer systems on Long Island, but the issue is money: although the federal government has provided funding in past years, that has been used up by the capital costs involved in installing sewer systems. He also said Long Island’s roads desperately need to be repaired. When Mr. Fazio asked him if he would support a 10-cent-per-gallon surcharge, Mr. Cameron said he would, stating such an increase would be negligible and also necessary, since the state has cut funding for all road improvement projects here on Long Island.

In addition to serving as Chairman of the Long Island Regional Planning Council, Mr. Cameron is the Founder and Managing Partner of Cameron Engineering & Associates, LLP, with offices in Woodbury, New York City and White Plains. He is an engineering graduate of the United States Merchant Marine Academy and earned a Master’s degree in Environmental Science from Long Island University. He also serves on numerous boards, including the Holocaust Memorial and Tolerance Center of Nassau County, the Hofstra University and Stony Brook University Engineering Schools, the U.S. Merchant Marine Academy Alumni Association and others.