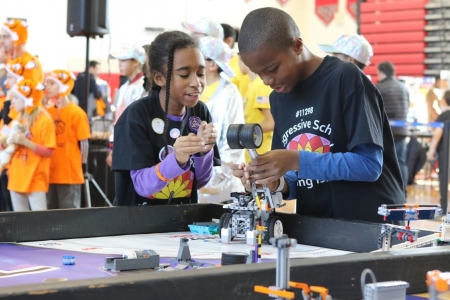 Following a series of qualifiers, 39 FIRST® (For Inspiration and Recognition of Science and Technology) LEGO® League teams from Nassau and Suffolk Counties are set to compete at the Long Island Championship at Longwood High School on Sunday, March 3. During the event, presented by School-Business Partnerships of Long Island, Inc. (SBPLI), students ages nine to 14 will present their LEGO robots to address the challenge set forth in this year’s theme – FIRST INTO ORBITSM.

These teams were among the more than 200 that worked hard this season to research, design, build, program and test LEGO robots that address a problem astronauts have faced during space travel. Students evaluated current solutions to the problem they identified, and designed, built and tested an innovative solution using a LEGO MINDSTORMS® kit.

Students presented their solutions during one of six qualifier tournaments that were held at Mineola High School and Huntington High School in late January and early February. At the Championship, these teams will look to advance to the FIRST World Festival in Detroit on April 24-27.

This will be the 15th year that FIRST LEGO League has enabled students on Long Island to explore STEM (Science, Technology, Engineering and Mathematics) through building and problem-solving. In addition, 2019 marks the 20th anniversary of the SBPLI Long Island Regional FIRST Robotics Competition. FIRST’s history and long-lasting impact on Long Island will be honored at all events this year.

“It’s wonderful to see so many students getting excited about the FIRST LEGO League challenge this year,” says Stephanie Stern, Program Co-Director and FIRST Long Island representative. “I was so impressed by each team’s performance during the qualifiers and enjoyed seeing how many skills they picked up by participating in the program—everything from teamwork to Gracious Professionalism® to STEM education. I can’t wait to see what the students bring to the championship. Join us between 10 am and 2 pm, there is no admission fee.”

For more information on SBPLI and the FIRST Long Island continuum of programs, or to become a sponsor, please visit www.sbpli-lifirst.org. The following 39 teams have advanced to the SBPLI Long Island FIRST LEGO League Championship, which will take place on Sunday, March 3 at Longwood High School:

The following 39 teams have advanced to the SBPLI Long Island FIRST LEGO League Championship, which will take place on Sunday, March 3 at Longwood High School:

Accomplished inventor Dean Kamen founded FIRST® (For Inspiration and Recognition of Science and Technology) in 1989 to inspire an appreciation of science and technology in young people. Based in Manchester, N.H., FIRST designs accessible, innovative programs to build self-confidence, knowledge, and life skills while motivating young people to pursue opportunities in science, technology, and engineering. With support from over 200 of the Fortune 500 companies and more than $30 million in college scholarships, the not-for-profit organization hosts the FIRST® Robotics Competition for students in Grades 9-12; FIRST® Tech Challenge for Grades 7-12; FIRST® LEGO® League for Grades 4-8; and FIRST®LEGO® League Jr. for Grades K-4. Gracious Professionalism® is a way of doing things that encourages high-quality work, emphasizes the value of others, and respects individuals and the community. To learn more about FIRST®, go to www.firstinspires.org.

School-Business Partnerships of Long Island, Inc. (SBPLI) DBA FIRST® Long Island is a fully volunteer-run 501(c)(3) non-profit organization founded in 1984 by Fred Breithut with the goal of developing partnerships between local high schools and businesses. His goal was to provide students with practical experience and curriculum development, while helping the business community develop its future workforce, which resulted in the formation of over 100 partnerships. In 1999, SBPLI brought the FIRST (For Inspiration and Recognition of Science and Technology) to Long Island, which featured just eight FIRST Robotics Competition high school teams. Since then, the Long Island Regional FIRST Robotics Competition has grown to two events with over 80 teams competing each year. SBPLI also hosts Long Island’s annual FIRSTLEGO League Qualifying and Championship Tournaments and the FIRST LEGO League Junior Expos, in which over 2,000 elementary and middle school students from Nassau and Suffolk Counties take part each year. In 2016, SBPLI added the FIRST Tech Challenge to its roster of programs. For more information about the programs, or to learn how to become a sponsor, visit www.sbpli-lifirst.org.