For the first time in history, the final will air on TBS 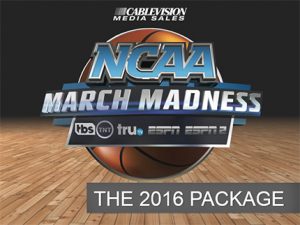 There’s no better time to advertise than during March Madness 2016. For the first time in tournament history, the game will air on basic cable, meaning your ads will be exposed to a wider audience than ever before!

NCAA Basketball in March is like no other sporting event. Hopeful teams compete in a dynamic month-long competition to see who is the best of the best in the NCAA. Advertising during March Madness is a great opportunity to give your business exposure to a wide audience as viewers tune in to watch some of the greatest teams in the country go head-to-head. Catch the intense action from the Conference Championships all the way to the National Championship Game.

Cablevision is offering 30-second spots that will feature your company during primetime and daytime showings. Act now to claim your in-game spot; there are only 46 total spots and they’re going quick!

One hundred and eighty Client Commercial spots are available on ESPN News, ESPNU, NBCSN, and FS1, March 14 through 16 (Monday through Sunday) from 6 a.m. – 12 a.m. (midnight).

If you are interested in placing an advertisement or for details regarding rates and pricing, please contact The Public Relations and Marketing Group at 1-855-PRMG-123 or email info@theprmg.com.