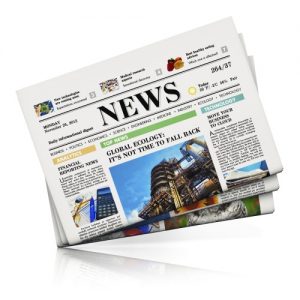 Where do you get your news? If this question were asked forty or even twenty years ago, the most common responses would have included radio, television and good old-fashioned newspapers. But the Pew Research Center and the John S. and James L. Knight Foundation recently released a study on news and social media, and the findings reveal a significant demographic shift over the past few years.

The big statistic revealed from this study is that 44% of American adults get news via Facebook. Yes, 44% of all adult Americans stay informed via the world’s most popular social networking platform. This number represents two thirds of all adult Facebook users, up from 47% of Facebook users in 2013.

Some other figures from this study are worth mentioning as well. The total percentage of American adults who get their news from any social media network (including Reddit, Twitter, YouTube, LinkedIn, Instagram, Tumblr, and more) is 62%, and almost two thirds of those usually get it from just one social media network. For journalists and marketers alike, this represents a paradigm shift. While news consumers of a previous generation might have read the day’s headlines in the morning paper, heard additional news on the radio during their commute to work and returned home to catch the six-o’clock news on TV, today’s consumers are increasingly likely to get their updates from just one source—most often Facebook. Today, information and advertising are still delivered via a screen, but more and more the screen is located on consumers’ desks or in their hands rather than in their living rooms.

Another important statistic: Among Instagram, Facebook, and YouTube users who get their news online, about 60% report that they merely see headlines while they’re doing other things online; only 40% specifically search the web for it. The internet has made it easier than ever before for information and advertising to reach consumers wherever they are, even if they don’t intentionally seek it out.

It is impossible to predict whether social platforms will ever completely crowd out the “traditional” media of newspapers, radio, and TV. But in regard to marketing and public relations, organizations can gain valuable information about consumers’ shifting news sources from last month’s report. A thoughtful, relationship-driven approach to advertising is essential to navigating the complex avenues of social media successfully.

If you have questions about how best to promote your organization across social media, The Public Relations and Marketing Group, LLC (PRMG) is happy to help. Don’t hesitate to contact us at (631) 207-1057 or at johnzaher@theprmg.com.