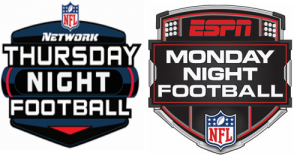 The NFL typically receives higher ratings than any other sport in the United States, and with two local teams, the New York area is as passionate about the sport as anywhere in the country. Local businesses will have the opportunity to connect with the large viewing audience through television advertising spots from Cablevision.

Cablevision is offering two packages that will offer a variety of formats and networks to advertise with. Both packages will feature :30 spots during Monday Night Football games on ESPN and Thursday Night Football games on NFL Network (some of which will be simulcast on CBS). The packages will also contain general spots from an assortment of networks that the advertiser can select, as well as ESPN sponsorship promos containing a company’s name and tagline.

The Touchdown Package consists of 1,268 total spots. Advertisers will be given two :30 spots per game for each of the 17 Monday Night Football games and the 15 Thursday Night Football games.  Two spots will also be included for each of the two preseason games that will air on ESPN. This results in a total of 68 spots which will run during NFL games. For general spots, the advertiser will get to choose one network per group from five groups of networks. The groups run :30 spots at various frequencies per week and during different times of day. All general spots will run for 20 weeks and will add up to a total of 900 spots. The remaining 300 spots are the previously mentioned ESPN sponsorship promos, and will run between 6 a.m. and midnight.

If you are interested in placing an advertisement, or for more information regarding rates or package details, please contact The Public Relations and Marketing Group at 1-855-PRMG-123 or email: info@theprmg.com .