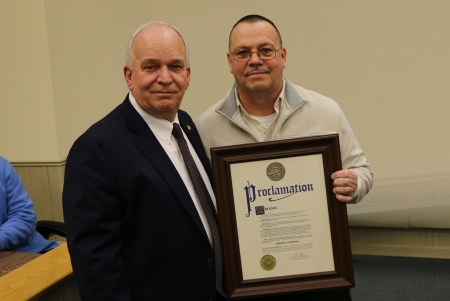 Caption: Mayor Allan M. Dorman (left), presents a proclamation to Joe Correira (right) for having served for nearly 25 years as Village Fire Marshal during a special ceremony at Village Hall on January 29.

At a special ceremony at Village Hall on January 29, the Village of Islandia honored Joe Correira, who is retiring as Village Fire Marshal after approximately 25 years of service.

Mr. Correira became Village Fire Marshal in 1995. He was responsible for inspecting all types of buildings to ensure compliance with established fire safety standards and making recommendations for building evacuation procedures. In addition, he assisted the Central Islip, Hauppauge and Lakeland Fire Departments at fire scenes and hazardous materials incidents.

Incorporated in 1985, the Village of Islandia is home to over 3,000 residents and over 1,300 businesses. The village’s proximity to New York City and the North and South shores of Long Island make Islandia an attractive destination for residents and businesses who may be thinking of relocating to Long Island. For more information, please visit http://www.newvillageofislandia.com.